A jet engine is a high performance precise piece of machinery that operates at the limits of human engineering.  As an engine, it needs to deal with extreme temperatures, environments and stresses that change when taking-off, cruising, and landing.  Doing this repeatedly whilst being safe, reliable, efficient and profitable means designing a successful jet engine is very complex and demanding.  Working on the materials which components are made from, the ISM conducts R&D for the next generation of jet engines.  To do this we need to know the conditions each component will experience depending on their role and location within the engine.

So before we look at each component in the engine, we need to understand how an engine generates thrust or forward motion.  A jet engine works on the physics concept of conservation of momentum. Momentum is the mass of something multiplied by how fast it is travelling, so things with lots of momentum are hard to stop.  Think about a game of rugby, a big forward running slowly is very hard to stop, much like a smaller back who is running very fast is also difficult to tackle/stop.  This is because they both have lots of momentum.  It is about mass and velocity.  Now a jet engine uses this idea by taking a mass of air into the front at a slow speed, and pushes the same mass of air out of the back a lot faster. Because the momentum going into the front of the engine is a lot smaller than that coming out the back, the engine generates forward trust thanks to physics i.e. conservation of momentum.  Check out the animation below to see how thrust is all about momentum.

Now looking at what the physics gives us, we see a few ways to make our plane go faster.  The first is to simply reduce the mass of the plane or make it lighter.  The second is to increase the mass of the incoming air whilst reducing its velocity i.e. make the air more dense.  The third is to make the air coming out of the back of the engine a lot faster than the air going in which is exactly what a jet engine does.

If you have a rigid tube with one end larger than the other, what goes into the system must still come out of it.  This is like a garden hose when you squeeze the end of it, the same amount of water has to come out of the hose even when you make the opening smaller, therefore the water coming out has to travel faster.  This is called the Venturi Effect and is why a jet engine is big in the front and very small in the middle.

We can step up this process by combining the Venturi Effect with the Ideal Gas Law.  The Ideal Gas Law relates temperature to the pressure, volume and amount of air.  The hotter a gas is, the more volume it takes up or the bigger it appears.  The opposite is also true.  Putting it together with the Conservation of Momentum we can now start working on how to go faster.  So at the front of our engine we have a fan and compressor which sucks in air and compresses it increasing the mass of the air in the engine but keeping the intake velocity low (increasing mair but keeping vin low).  The air is then ignited with the help of some fuel and expands in size/volume.  The same air mass going into the engine has to leave the engine, but because it takes up more space or volume, it has to travel a lot faster meaning we increase vout.

Summarising, we have air entering the engine, compressing, igniting and exiting a lot faster than when it entered, or “suck-squeeze-bang-blow”.  Thinking back to momentum and how much a plane weighs and how fast it travels, we start to realise the scale of what jet engines achieve.

So, let’s get inside the engine…

Jet Engine by matengswanu on Sketchfab

When we look inside a jet engine, we can break it down into six different zones: 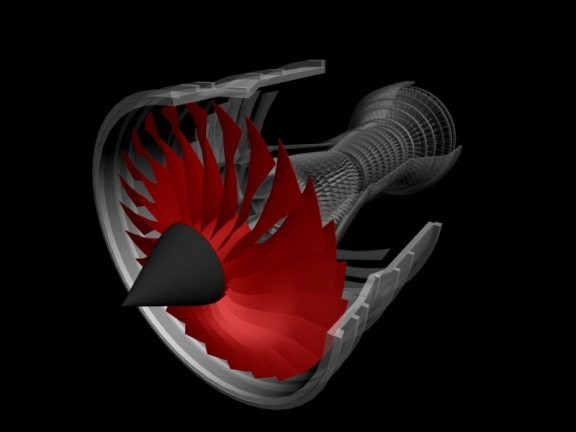 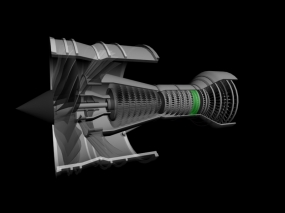 The Fan Section sucks in air from the atmosphere increasing the mass of the air passing through the engine.  This is especially important as the higher the altitude, the less air there is to suck in and ignite.  Being first part of the engine also means the fan section has unique challenges. 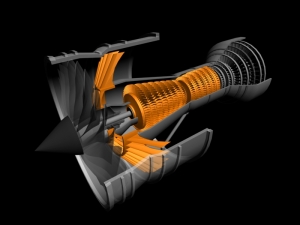 Sitting behind the fan section is the Compressor.  This section of the jet engine takes incoming air and increases its density through a series of blades.  Although the air is still relatively cool at this point, the pressure the blades experience is high as they are forcing a large amount of air into a small space. 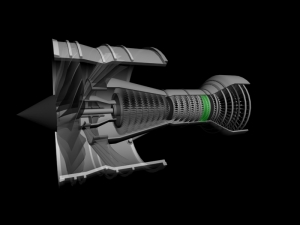 The Combustor is where fuel is added to the dense air and ignited.  This section experiences high temperatures and stresses but has no moving parts.

In next stage of the engine newly ignited and rapidly expanding air from the combustor passes through the turbines.  This hot air turns the turbines, which then rotates the fan and compressor sections by turning the shaft.  This means the process of taking in new air and compressing it is powered by hot air coming out of the engine.

There are a number of other components in the engine that perform major and minor roles.  An obvious one is the casing which protects the engine from debris and corrosion.  Other things like coatings also are important as they allow for components to be protected and monitored.